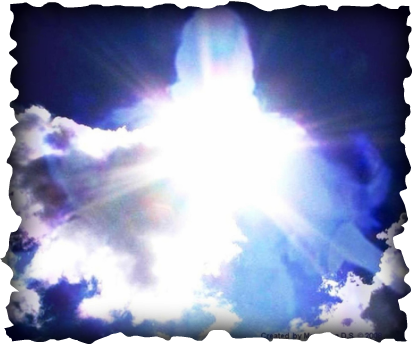 "Let the
little children
come to Me and do not hinder them, for the kingdom of God belongs to
such as these."
Mark 10:14 NIV
Waiting There for You
My next story is about a little boy named Steele.  His parents couldn't have chosen a more perfect name for their child.  For when one thinks of steel, thoughts of great strength come to mind.
Inner strength, is beautiful quality to have and Steele had been blessed with an abundance.  Along with an endearing happy spirit!
Terminally ill but never showing it.  He lived his short six years,   touching the hearts and lives of others, in and out of the hospital.
Three days after his sixth birthday, and six days before Christmas, God gave Steele the precious gift of eternal life.  On Christmas Eve, God also gave Steele's parent's a special gift.  A poem, entitled Waiting There,
which had been inspired the night before.
Even in death, their son continued to touch hearts.  For his story had been picked up by the Associated Press, and appeared in our local newspaper.
The heading: "Boy touches hearts before his own gives out," was accompanied by an adorable picture of Steele.  While reading the paper, the article caught my mom's attention and tugged at her heart.
Realizing how devastated his parent's must be, and on a mission, to help offer some comfort, mom was pretty adamant that I take time to read this article.   Also mentioning the need to pray, because this couple really needed a poem from God.
True to the ministry Papa's called me to, Jill and Mike, Steele's parents, would be getting their "hug from heaven"!  A loving gift to heal heavy hearts, in answer to so many prayers.  What a beautiful earthly form, of God's Compassion and Love.
Immediately, a poem was inspired, after reading the gentle way, Steele's parents had prepared him to leave this world.

As I began to write, the tears streaming down my face began hitting the paper.  Reaching for some tissue, my eyes were drawn to the open Bible next to me.  Revealing the Scripture verse for this precious poem, I was moved beyond words.
"What we see will last only a short time.
But what we cannot see will last forever."
2 Corinthians 4:18 NIV

Waiting There
by Kathie Iselin ©  fromPapaGod.com
We can't tell you when or why for we don't know...
But when it's time for you to go - you go.
You'll see Jesus and His beautiful Light...
Sweetheart, you run to Him it'll be alright.
So Steele listened to what they had to say...
Running into the Lord's outstretched Arms that day.
To be caught up in a Strong Loving Embrace...
As God held him close and kissed his little face.
So hold tight to your son's precious memory...
Find comfort in knowing he's healed and set free.
Being raised by his heavenly Father above...
And the mothering angels bestowing their love.
Until the time, our Savior calls you home to share...
Eternal life with your child, whose waiting there.

"How great is the love the Father has lavished on us,
that we should be called children of God!
And that is what we are!
1 John 3:1 NIV
God's hand was evident in this entire process and would continue in an even more profound way.
As I mentioned in previous stories, it's always an adventure when it comes to delivering these poems.
Sometimes they're sent via the mail, where He mysteriously provides the address.  Or orchestrates a divine connection for a face to face contact.  But rarely does He use the phone, because newspapers don't include that type of personal information.
So I was surprised, when I returned home from church and felt prompted to call this couple.  Not remembering their last name or where they were from, I reviewed the article again.
When I discovered it, I couldn't help but smile.  Since their name was Smith and they were from a large city, I definitely needed some Divine Intervention.
God certainly has a sense of humor.  Why couldn't the name be  something uncommon, so it would be easily found.  No, I get Smith and on Christmas Eve no less!
Despite the daunting list of "Michael Smiths", I was determined to deliver this heartfelt message, even if it meant dialing all of them!
So after praying, I scanned the list and one number seemed to pop out.   Here we go I thought.  Incredibly the first number I dialed was theirs!
Since I had no idea initially that I'd reached the correct party, I began the conversation by saying: "I'm not sure if I have the right number..."   Before I could finish my sentence, Mike said: "You have the right number, we're Steele's parents."  Amazing, for I hadn't mentioned yet who I was looking for.
What was even more incredible, was that he told me how uncanny the timing had been.  They had not intended to be home and were just leaving.  Had I called even a minute later, I would not have reached them.  Thank you God, for all those lessons on obedience!
So they'd be able to hear the poem together, I asked Mike if Jill could pick up an extension.  She did, and listening as one heart, Papa God's Christmas blessing was delivered.
What a fitting memorial for a child, who touched so many hearts on earth during his short life.  And he'd continue doing so, through the poem he first inspired and the story behind it.
My sincerest desire is that by reading these heartwarming stories, your faith in Papa God has grown.  Even the pictures He's provided have His signature on them.  For who but God can provide a photo of Jesus in a cloud of light.  Perfect for a poem that says run to Him!
Strengthening the realization that God truly does watch over us.  He feels our pain and wants to bring solace to our souls, if we only trust and believe.
"If I say, surely the darkness will hide me and the light become night around me, even the
darkness will not be dark to you."
Psalm 138:6 NIV
Many of you have been coming to this story as a direct link that's been shared.  If you'd like to read the other inspirational stories behind the poems, click on...    Come Fly With Me.
If you've started from there, may we suggest our lighthearted photo galleries called...
Smile Awhile