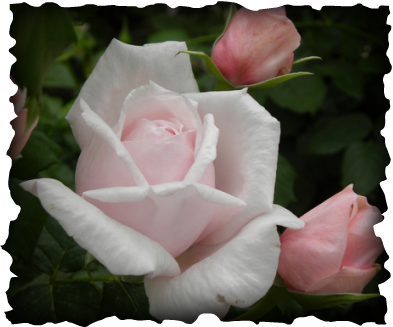 
"Faith is being sure of
what we hope
for and certain
​of what
we do not see."
Hebrews 11:1 NIV
The Rose
Having God in your life gives you hope.  With hope there is faith.  And nothing pleases God more, than when we trust Him with childlike faith.
The poem The Rose was inspired by the childlike faith, of my five year old son, Brian.
It was fall and our family was busy raking leaves and pruning bushes, getting the yard ready for winter.  I'd just finished pruning down a rather large rose bush.  When I looked up and noticed Brian intently studying one of the pruned off buds.
As he began peeling it open, he remarked: "Look mommy, when you try to make it open it falls apart."  I responded by explaining that only God, could unfold it into a beautiful blossom.
He looked up at me, and said: "Yup, we only mess it up if we try." "And now my flower is as messed up as we are." He said, as he began shaking the mutilated petals off his hand.
Our family was going through a very difficult and emotional time. To help ease some of the stress and increase my children's awareness of God, we'd begun praying for happy signs from heaven.  Then made a game of it, by looking around daily for some "God Sighting".
Not only was it fun but it reassured them of God's Presence in our lives.  Even in sad situations, we could see God's Touch all around us, in the fall colors, a lady bug, and whatever else they'd discover.
So I wasn't surprised that while we worked, he suddenly announced, that he'd just prayed for a happy sign.  What I wasn't prepared for, was Brian asking for something specific.  As he proceeded to explain the happy sign from God he wanted, was for the rose bush to bloom.   That would be God's way of letting us know everything was going to be okay.
My heart sank, as I stared at the pruned down and pitiful bush, that the first frost had already killed.  Frantically, I searched for something to say.  I mean what would happen if it didn't bloom.
Then I realized, here was a child who'd just turned five, with more faith than me!  When had I lost that precious innocence and childlike faith, where nothing's impossible with God.
Yet; here was my son, not only believing our heavy hearts would be lifted, but that it was no big deal, for God to make a dead bush bloom!  All I could do was hug him and shoot up one of my own prayers.
Still in bed and half asleep, I'd completely forgotten all about the prayer.  Brian on the other hand, was up at the crack of dawn.  And running outside in his P.J.'s just as the sun was coming up.
I'll never forget the look on his face and how excited he was, shouting: "Mommy come see, God answered my prayer!"  There on the "dead" rose bush was not one, but four fully opened blossoms!
Brian even had an answer for why there were four roses.  He explained that God gave him one rose for each of us, Mommy, Daddy, Danny and me.  Which meant all of us would be okay!  In memory of that day, God blessed me with one of my first poems.
Life is Like Rose
by Kathie Iselin ©   fromPapaGod.com
A blossom yet unopened is difficult to unfold...
God's floral creation has a secret we've not been told.
The mystery of unfolding is known only to God above...
He works His magic slowly with gentleness and love.
So like the tiny rosebud we need Him along the way...
To guide and love and lead us in all we do each day.
So trust and have faith, for it is God who truly knows...
How to unfold our lives, just like He unfolds the rose!

"With man this is impossible,
but with God all things are possible."
Matthew 19:26 NKJV
The story doesn't end here it just gets better.  When we moved the next year, we had to leave the rose bush behind.  Since our new yard didn't have any roses, I purchased six bushes.
Brian claimed one as his own, and after careful consideration, began to dig a hole.  Not only was it too close to the driveway, but it was also next to the basketball hoop!  Despite the fact I have no green thumb, even I knew this was not an ideal spot.
Doubtful it would survive a summer of being battered by basketballs.
And if it did manage to make it to winter, it was surely doomed, when the snow plow hit it.
Yet; it was Brian's bush and he remained adamant.  God obviously sent an army of angels to guard that bush, for it's survived twelve winters and one drought thus far.
Meanwhile, the other five buses died the first year.  Guess I should have consulted Brian, rather than listening to the garden centers advise.
Not only did the bush survive, but the memory of how God had answered his prayer, still remained, as well as that childlike faith.  For Brian decided, to pray for his "special God Sighting" again.
Only this time, our hearty little rose bush, was not only pruned for the winter, it was winter and covered with snow!  Despite the fact I wasn't aware, the prayer went up, I did witness the power come down!    There blooming on a dead bush, surrounded by snow, were four very real and very red roses!
Again the number four, yet; this time, each one was in a different stage of opening, from bud to fully blossomed.  Just as each of us were in different stages of healing.
So we'd always have a reminder of that cherished "God Sighting", I took pictures and saved a petal for each of us.  Sealed in plastic, as a permanent remembrance, of a child's faith, and the power of prayer! 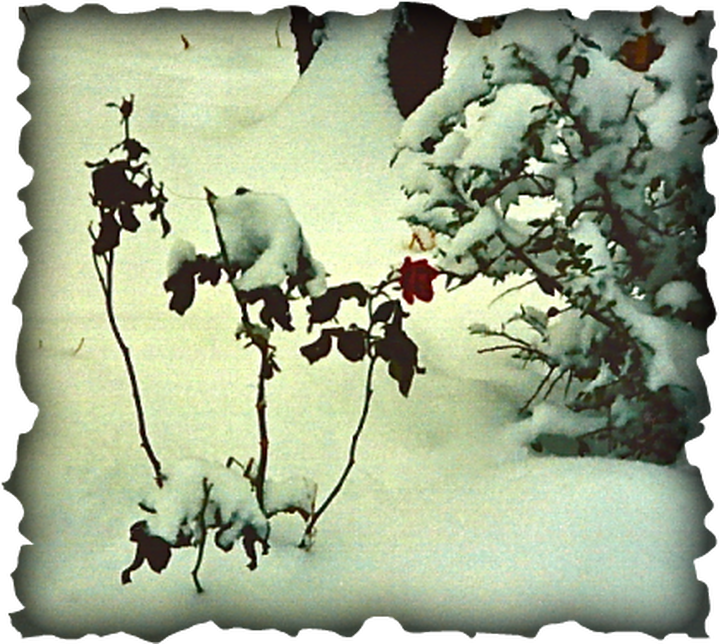 This next story is truly inspiring...